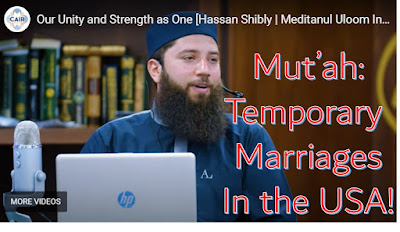 (April 16, 2021)  This week Hassan Shibly one of the most well known followers of Islam in the United States, confessed to having engaged in contract marriages to NPR. According to NPR, “Shibly said that he did enter into religious marriage contracts with women outside his legal marriage when he and his wife were separated and prior to that — with her permission and when he felt their marriage was essentially over. He denies that any of the relationships were secret or abusive and described them as courtships.”

This should be no surprise as temporary marriages are accepted normal under Islam. This is part of the Islamic social norms that they bring with them into Western Civilization where polygamy is illegal and the concept of contract marriages is known as prostitution. In Islam it is simply called Mut’ah. Many people have been saying this can never happen in North America. BUT IT IS!

The truth is that this Islamic social norm has been a part of Islam since the time of Muhammad! The concept of a temporary marriage is based on the Quran 4:24 and 5:27.

And [also prohibited to you are all] married women except those your right hands possess. [This is] the decree of Allah upon you. And lawful to you are [all others] beyond these, [provided] that you seek them [in marriage] with [gifts from] your property, desiring chastity, not unlawful sexual intercourse. So for whatever you enjoy [of marriage] from them, give them their due compensation as an obligation. And there is no blame upon you for what you mutually agree to beyond the obligation. Indeed, Allah is ever Knowing and Wise.

O you who have believed, do not prohibit the good things which Allah has made lawful to you and do not transgress. Indeed, Allah does not like transgressors.

Narrated Abdullah:
We used to participate in the holy wars carried on by the Prophet and we had no women (wives) with us. So we said (to the Prophet). "Shall we castrate ourselves?" But the Prophet forbade us to do that and thenceforth he allowed us to marry a woman (temporarily) by giving her even a garment, and then he recited: "O you who believe! Do not make unlawful the good things which Allah has made lawful for you."

This revelation of Muhammad for mut’ah was recognized and acknowledged as still current by Sunni scholars during ISIS’ beginning conquests. Islamic scholars issued fatwas giving the mujahdeen (fighters/jihadis) the right to rape women. One ofthese Islamic scholars, “Muhammed al-Arifi issued a fatwa that allows jihadi fighters to rape Syrian women.” This fatwa was shared with the world by Lebanon’s Al Jadeed TV. Al-Arifi allowed the jihadis to engage in "intercourse marriage" that lasts for a few hours ‘in order to give each fighter a turn.’”

What al-Arifi said to the women living there, including the Muslim women was a little more horrifying. This statement is addressed to all women living in Syria.

It is the women's duty to acquiesce in this arrangement in order to reach paradise because it "boosts the determination of the Mujahideen in Syria" as long they are at least 14 years old, widowed, or divorced.

It is important to recognize that this fatwa recognizes an allowance for temporary marriages. While allowing and ordering the legality of rape. This is within both Sunni and Shi’ah Islam. Is this a social norm you want to see prevalent in your community?

Hassan Shibly has just openly confessed to engaging in Mut'ah. In doing this he is openly promoting this illegal practice in the USA as something NORMAL! That should make every American shake his head and say "NO, NOT HERE!"

Please support my work by giving to my patreon account.