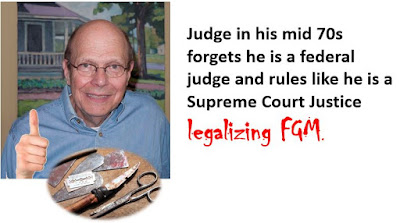 On November 20, 2018 Judge Bernard Friedman, of the US Federal District Court in Detroit ruled that a federal law barring Female Genitalia Mutilation (FGM) was unconstitutional since it was in his opinion a law made regarding religion. There are several issues with this erroneous ruling.

1. A federal district court is not the US Supreme Court which is the only court that has the power to determine constitutionality of a federal law.

According to US Courts.gov, federal courts, “Federal courts hear cases involving the constitutionality of a law, cases involving the laws and treaties of the U.S. ambassadors and public ministers, disputes between two or more states, admiralty law, also known as maritime law, and bankruptcy cases.” However, this is a summarization of the roles of the entire judiciary branch of the federal government. It does not define what a federal district court does. This is found below:


The nation’s 94 district or trial courts are called U.S. District Courts. District courts resolve disputes by determining the facts and applying legal principles to decide who is right.

Trial courts include the district judge who tries the case and a jury that decides the case. Magistrate judges assist district judges in preparing cases for trial. They may also conduct trials in misdemeanor cases. (http://www.uscourts.gov/about-federal-courts/court-role-and-structure)

2. The Judge is declaring himself the equivalent of nine justices on the Supreme Court in Washington, DC. In doing this it calls into question his mental health.

When a person believes he/she has for more authority than they actually have and acts on that belief, that is by definition delusional. Dr. Steve Bressert, states on PsychCentral.com:


Delusional disorder is characterized by the presence of either bizarre or non-bizarre delusions which have persisted for at least one month. Non-bizarre delusions typically are beliefs of something occurring in a person’s life which is not out of the realm of possibility. (https://psychcentral.com/disorders/delusional-disorder-symptoms/)

Judge Bernard Friedman has acted as a judge, believing his authority is above that of legislatures for multiple years. Yet constitutionality of law is not officially a district court judge assignment. It is a Supreme Court Justice assignment. Dr. Bresserts article states that diagnostics of delusional behavior require that in order for this to be a diagnosis, the person in question must not have schizophrenia and apart from the delusion other behavior appears normal.

3. This ruling is a display of bias against those who brought charges disqualifying him from making a ruling in the first place.

The judges place in a federal court is to try the case, not take sides. By declaring a federal law unconstitutional the judge acted in a manner that displays bias. As (2) states it may be a delusional belief that allowed an action, but it is also a display of favor/bias on the part of the judge. He did not allow the case to be presented against the doctor accused. Instead Judge Bernard Friedman chose to go beyond the case presented and show his personal thoughts and beliefs by ruling the law unconstitutional. This case was never about whether a law is constitutional or not. It about whether the law was violated or not. That must not be forgotten!

4. FGM is a surgical procedure that mutilates a woman's body. It is not a religious procedure. It requires surgery, and should require anesthesia, stitches and follow-up care.

The World Health Organization has addressed Female Genitalia Mutilation (FGM) for decades. According to their publication, WHO Guidelines on the Management of Health Complications from Female Genital Mutilation, FGM is not exclusively a religious practice. This means that the judge in his ruling not only saw himself in a delusional higher status, he also saw himself as above medical doctors who have been writing on this topic for decades. Who states the following on the reasons FGM is practiced:


FGM is practised for a variety of sociocultural reasons, varying from one region and ethnic group to another. The primary reason is that it is part of the history and cultural tradition of the community. In many cultures, it constitutes a rite of passage to adulthood and is also performed in order to confer a sense of ethnic and gender identity within the community. In many contexts, social acceptance is a primary reason for continuing the practice. Other reasons include safeguarding virginity before marriage, promoting marriageability (i.e. increasing a girl’s chances of finding a husband), ensuring fidelity after marriage, preventing rape, providing a source of income for circumcisers, as well as aesthetic reasons (cleanliness and beauty) (Ali AA. Knowledge and attitudes of female genital mutilation among midwives in Eastern Sudan. Reprod Health. 2012;9:23.). Some communities believe that FGM is a religious requirement, although it is not mentioned in major religious texts such as the Koran or the Bible. In fact, FGM predates Islam and is not practised in many Muslim countries, while it is performed in some Christian communities (ibid). Whatever the reason provided, FGM reflects deep-rooted inequality between the sexes. This aspect, and the fact that FGM is an embedded sociocultural practice, has made its complete elimination extremely challenging. As such, efforts to prevent and thus eventually eradicate FGM worldwide must continue, in addition to acknowledging and assisting the existing population of girls and women already living with its consequences whose health needs are currently not fully met.

I call upon President Trump and Congress to act against usurpers in federal judge robes, believing they are Supreme Court Justices. Act to stop this insanity and act to protect the people of the United States by again recognizing that this federal law against FGM is indeed constitutional and that the judge had no authority to declare it otherwise!