In addition, the Center for Immigration Studies (CIS) published How to Screen 600 Syrian Refugees a Day: A "Surge Operation" by Nayla Rush that tells you what the State Department is not telling you!


U.S. ambassador Alice Wells said…The temporary processing center… will run until April 28 and will process 10,000 refugees. It is part of "our effort to reach President Obama's directive to send 10,000 Syrian refugees to the United States by September 30, 2016, while also ensuring that every refugee accepted by the United States has been thoroughly screened and vetted through our rigorous security process."

Six hundred interviews will take place at the center every day to meet that goal. Most of the 10,000 refugees will be resettled from Jordan despite the fact that all Syrian refugees are covered by the surge.

According to Ambassador Wells this expediting system to rush Syrian “refugees” to America began on February 1st.  This means that they have had all of February, March and April to interview 600 persons a day, 5 days a week. 53 days since Easter and Presidents’ Day are two Federal holidays equates to 31,800 interviews to date as of April 15th.

We can answer that question by examining what is happening in Europe today.  This is what we can expect:

1.       Islamic Enclaves will be created where sharia is enforced. The United Kingdom’s former head of Equalities and Human Rights Commission said this week that  Muslims are establishing "nations within nations" throughout Europe for the purpose of not assimilating into the culture of their new countries.

Guy Millière pointed out in his article for the Gatestone Institute this week, Europe: Suicide by Jihad” the inconvenient fact that:

One of the organizers of the Paris bombings, Salah Abdeslam, was able to live peacefully in Molenbeek for four months until police decided to arrest him. Belgian police knew exactly where he was, but did nothing until French authorities asked them to. After his arrest, he was treated as a petty criminal. Police did not ask him anything about the jihadist networks with which he worked. Officers who interrogated him were ordered to be gentle. The people who hid him were not indicted.

2. Muslims will portray themselves as good “Americans to non-Muslims.” Brussels jihadist attacker Osama Krayem was featured in a 2005 documentary, “Without Borders — A Film About Sport And Integration.” In this documentary Osama was shown to be an excellent example of integrations into Western Switzerland culture. However, just 10 years later he became one of the jihadists who attacked Brussels, Belgium. The reason for this “change” is that the duality in Islam requires saying and appearing one way to non-Muslims while supporting your Muslims Brothers and Sisters. The Koran reveals this duality when it says to the Muslim:

O you who believe! Take not the Jews and the Christians as friends, they are but friends of each other. And whoever befriends them, then surely, he is one of them. (Surah 5: 51)

This order is given and backed up with other Islamic scriptures. The Tafsir Ibn Kathir vol. 3 pages 203-206 cover this in depth. Reading what Muslims tell other Muslims reveals a whole other world about Islam than what they tell us they believe. That is the duality. In Islam Allah is the “Great Deceiver” and war is won through deceit.

This means they will appear to be the greatest of friends but will stab the non-Muslim in the back when they feel safe to do so. When they move from a minority to a majority they will feel free to do what their Allah commands.

A British TV program ran a program that was created from an ICM poll that revealed many disturbing things about the growing population of Muslims in the UK.

3.  Muslims plan to commit Civilization Jihad They plan to take over through overpopulation by having more wives and babies than other Americans. This concept is so prevalent in Europe that people are now predicting that Denmark will soon cease to exist as a democracy in Europe and will be proclaimed an Islamic country soon.

This means infiltrating every level of government, schooling and society to prevent the truth about Islam from being told. (Read my Book: Civilization Jihad and the Myth of Moderate Islam)

4. Muslims will work to take away your free speech beginning with your ability to insult Allah and Muhammad. The White House was caught censoring another head of state on this issue last week! This action simply put the word Islamic and terrorism together!

This is the reality we face today! 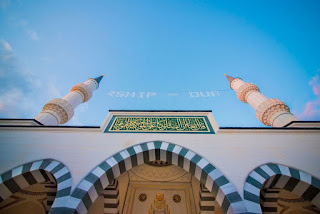 When the US media is scooped by the Russia Today on events happening in the United States, you know we have a problem with getting important information to the common man today. This speaks to the truth in not trusting the major media outlets. What did they miss?

This past week Turkey’s president Recep Erdogan spoke at the Diyanet Muslim Center in Maryland, a mosque funded by the government of Turkey. Russia Today covered the physical removal of reporters. Some were physically abused by Turkey’s presidential security team.

Violence and chaos reigned outside the event, with one journalist physically removed from the venue by Turkish security personnel, another kicked by a guard, and a third, a woman, thrown to the sidewalk in front of a Washington think tank. Erdogan’s bodyguards also insulted, threatened and pushed the journalists.

The violent nature of President Erdogan’s men was not missed by Russia Today as they were the media that reported:

The unruly behavior of Erdogan’s guards comes just a day after they tried to drown out the voices of protesters by howling at them loudly. The strange offensive drew mocking reactions online and within Turkey, where the screaming guards got their very own hashtag: #ÖÖÖEEEEEEEAAAAAAĞĞĞĞĞĞHHHHH.

This speaks to an additional problem. Mosques are not religious centers alone. They are political centers. Every person being introduced to Islam is told “Islam is not a religion it is a complete way of life.”[2] This means that Islamic Centers /Mosques are also political centers.[3] As such this mosque should have to register as a foreign lobbying group as its financing comes primarily from Turkey. The placement of this mosque /political entity enables it to influence federal employees in Washington DC and the local Islamic community.

Not considering this as a possible intention of Erdogan’s funding of the mosque is an Intelligence failure of the United States!