Judge Watson's TRO is teeming with Evidence of Bias and PREJUDGEMENT! 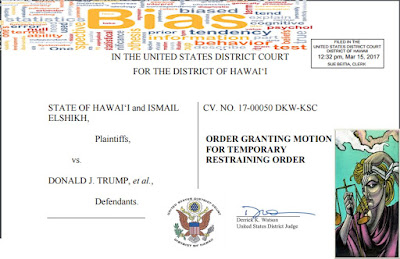 As I read the Order Granting the Temporary Retraining Order (TRO) in STATE OF HAWAI‘I and ISMAIL ELSHIKH vs. Donald J. Trump, et. al., I began to wonder how this document was written with any assemblance of juris prudence professionalism. I say this knowing it is practically impossible for a judge to write a 42 page document excluding the title page which makes 43 in a matter of two hours. I took an extra step to verify this by talking to lawyers who had seen judges using their clerks assistance to complete maybe 12 pages in two hours due to needed discussion and citation verification not to mention proof reading.

I suggest every American read this ruling to discover what I did. Namely, that US District Court Judge Derrick Watson who awarded the TRO had the majority of the decision pre-written prior to entering the court! This TRO then becomes an example of unethical conduct of a judge.

The State of Hawaii presented a case claiming economic hardship should these six countries be banned. Among the claims of economic hardship was a statement that tourism declined by 100 persons from the Middle East. Notably absent is whether there was an increase or decrease in tourism for the month in question as compared to last year.

Yet, even Judge Derrick Watson  admits in a FOOTNOTE:

The State of Hawaii made the outlandish claim that the University of Hawai’I would suffer economical hardship. Absent is a statement of how many students from these six countries currently are enrolled and how many are generally recruited a year. Somewhat humorously, the state claimed:

Oh, the insanity! The college can NOT collect from students who can NOT legally enter the United States is a hardship??? Well just how many students are we talking about? Better yet, are these foreign students being given state or federal grants that enable them to attend the University of Hawai'i?

The State of Hawaii went on and stated that if the ban goes into effect it will likely cause the closing of the Persian Language and Culture program. Oh the insanity in deleting a program that requires TWO instructors!!! Below is a screenshot pulled from their site listing their academic instructors! ALL TWO OF THEM!!! 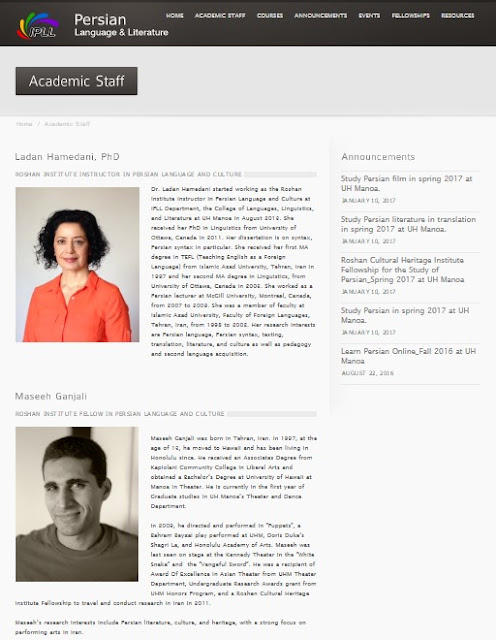 Dr. Ismail Elshikh is listed as the co-litigant. Interestingly this name is misspelled possibly purposefully because his name is listed in news articles as "Ismail El Sheikh." While it is not uncommon for Arabs to use various transliterations of English for their name, it is not acceptable for someone who has lived in America for sometime to do this. I want to have this issue resolved and to understand the meaning behind the misspelling.

Dr. Ismail El-Sheikh claims that his children are suffering hardship because his mother-in-law is not able to come to America, though it was established that she is in a the process of being able to come due to family being here.

Dr. Ismail El-Sheikh is quoted in the TRO as having stated:
I am further at a loss when I read on page 23-24:

Vasquez v. Los Angeles Cty., 487 F.3d 1246, 1250 (9th Cir. 2007)  (“The concept of a ‘concrete’ injury is particularly elusive in the Establishment Clause     context.”). “The standing question, in plain English, is whether adherents to a religion have standing to challenge an official condemnation by their government of their religious views[.] Their ‘personal stake’ assures the ‘concrete adverseness’ 24 required.” Catholic League, 624 F.3d at 1048–49.

The bill makes no illusions to religion at all. Even though they do quote an adviser to the president they do not provide proof that there is a ban on a religion. Which of course can be easily disproved by naming off Muslim countries that have no ban!

On Page 27 the ruling states:

The mentioning of freedom of speech makes no sense here! Is this evidence that Judge Derrick Watson  could not find judicial reasoning to support his conclusion?? Can anyone see logic in this ruling?

“Indeed, the Government defends the Executive Order principally because of its religiously neutral text —“[i]t applies to six countries that Congress and the prior Administration determined posed special risks of terrorism. [The Executive Order] applies to all individuals in those countries, regardless of their religion.” Gov’t. Mem. in Opp’n 40. The Government does not stop there. By its reading, the Executive Order could not have been religiously motivated because “the six countries represent only a small fraction of the world’s 50 Muslim-majority nations, and are home to less than 9% of the global Muslim population . . . [T]he suspension covers every national of those countries, including millions of non-Muslim individuals[.]” Gov’t. Mem. in Opp’n 42.

The illogic of the Government’s contentions is palpable. The notion that one can demonstrate animus toward any group of people only by targeting all of them at once is fundamentally flawed. The Court declines to relegate its Establishment 31 Clause analysis to a purely mathematical exercise. See Aziz, 2017 WL 580855, at *9 (rejecting the argument that “the Court cannot infer an anti-Muslim animus because [Executive Order No. 13,769] does not affect all, or even most, Muslims,” because “the Supreme Court has never reduced its Establishment Clause jurisprudence to a mathematical exercise. It is a discriminatory purpose that matters, no matter how inefficient the execution” (citation omitted)). Equally flawed is the notion that the Executive Order cannot be found to have targeted Islam because it applies to all individuals in the six referenced countries. It is undisputed, using the primary source upon which the Government itself relies, that these six countries have overwhelmingly Muslim populations that range from 90.7% to 99.8%.12 It would therefore be no paradigmatic leap to conclude that targeting these countries likewise targets Islam. Certainly, it would be inappropriate to conclude, as the Government does, that it does not. (p. 30-31)

Interestingly, this statement quotes the last judge who ruled against President Trump’s Executive Order on immigration restrictions but tries to hide doing so in not revealing the citation:

the Supreme Court has never reduced its Establishment Clause jurisprudence to a mathematical exercise. It is a discriminatory purpose that matters, no matter how inefficient the execution.

Worse still is the lack in understanding that the are using math to justify their reasoning while stating that math should not be used for this purpose. This also demonstrates that the judgement was given prejudicially be not applying statistical analysis in math to examine why those six countries were deemed to be terrorist supporter countries. This provides a one sided view. Something judges are not supposed to do.

CONCLUSION:
This TRO’s standing is based on a belief that people who are not American citizens are under the US Constitution! This is highly misleading, unethical and teem of nothing but judicial activism!

Where is the outrage? Why are the major media outlets not asking these questions? Because it would not fit their narrative? If  Judge Derrick Watson  is not removed for unethical and unConstitutional activism, all of America will suffer! Call your Senator ask for Judge Derrick Watson to be impeached today! The evidence is all in the TRO.