The Deceitful Misinformation that Created a TRO 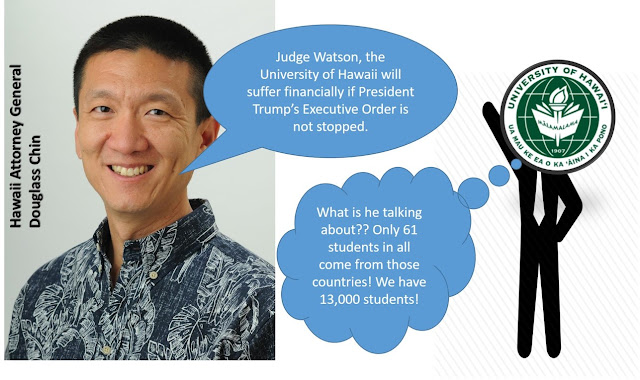 When evidence exists to prove a state attorney general purposefully misinformed a federal judge whether IN COURT or through paperwork as to what evidence exists to support a stand against the President of the United States what is this called? Is it perjury?

Hawaii AG Doug Chin was not under oath, but there is an expectation of professionalism and truthfulness when presenting before a judge whether through passing of papers OR standing and presenting a case! So why did he misinform Judge Derrick Watson about the statistics related to the University of Hawai’i.

Judge Watson’s TRO cited AG Douglass Chin's additional claim that if the ban goes into effect it will likely cause the closing of the Persian Literature, Language and Culture Program.

So what are the actual statistics? I filed a FOIA request with the University of Hawai’i to find out.

Attorney General Douglass Chin made a claim that a drop in these students ability to attend classes would likely close the Persian Language, Linguistics and Culture Program courses.  Only 52 students in total are enrolled in these courses taught by two professors. If AG Chin had a chance to find a negative effect against the University of Hawaii this was it. In all 4 students would be effected. Those four are from Iran, bringing the percentage of students effected of those that attend to 8%.

This brings us to asking simple and important questions. How could Hawaii State Attorney General not have access to this information? It took me one week to obtain it and I live in New York. This brings us back to, is it allowable for an attorney to purposefully withhold information for the purpose of misinforming a judge.

Attorneys Joel Cohen and Danielle Alfonso Walsman wrote about just this type of thing in the New York Law Journal on June 1, 2009 in an article entitled Asking for Trouble: When Lawyers Lie to Judges.

One of the first and most obvious things we learn as lawyers, and, indeed, the disciplinary rules make clear, is that lawyers must follow the same instructions given to clients in preparation for testimony: You cannot ever lie in court! And if a false representation is made to the court, even unintentionally, a lawyer who later realizes his error is affirmatively required to take reasonable measures to remedy the statement.

I do not know if Attorney General Douglass Chin considers his filing for a TRO against President Trump’s executive order a place he should be allowed to create misinformation  to prove his point, but in either case these statistics prove that the TRO is at least partially established on false and misleading information. If the Judge had not bothered to pre-write his decision, he could have easily verified the information I am sharing and in so doing exposed AG Chin as not being wholly truthful in court.

The sad truth then is that this is likely evidence of collusion between the Hawaii AG and the Judge Derrick Watson. If Judge Derrick Watson had not come to the bench with a pre-judgment, he likely would have checked the statistical claims of the AG.
There are 50 copies left of this book. Please use the button below to purchase a copy. Books are $17.00 plus $3 shipping.