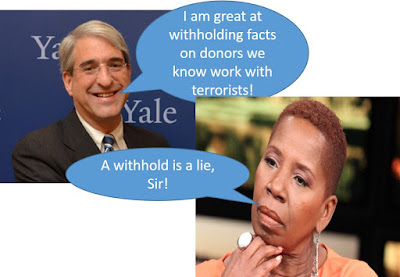 An omission of fact is a purposeful misrepresentation of fact. In a court of law, district attorneys can be severely disciplined for allowing such to happen especially when the results are the successful prosecution of an innocent person. Defense attorneys also have to be careful that they too do not fall under this ominous ethical charge.

The federal government has regulations regarding the concept of omission of fact, much of it is found in U.S. Code: Title 22 - FOREIGN RELATIONS AND INTERCOURSE. Keep this topic in mind as the concept of foreign relations is foremost in this topic!

In September, Yale University’s president Peter Salovey presented to the public that it was a recipient of $10,000,000 from Abdallah S. Kamel of the Dallah Albaraka (aka Al Baraka) Group in Saudi Arabia for the establishing of an Islamic Law Center in the Law School at Yale which shall bare the name: Abdallah S. Kamel Islamic Law Center. According to Mr. Salovey this center exists for the purpose of disseminating “knowledge and insights for the benefit of scholars and leaders all over the world.” This makes the center within the Law School at Yale an educational entity where classes and research will occur, and for the purpose of this commentary shall hereafter be refered to as a “Sharia School.”

Mr. Salovey’s announcement of Yale’s acceptance of these funds did not inform the public that Abdallah Kamel of several important points.  The first of Mr. Salovey’s omissions of fact regarding the “gift” of $10,000,000 being that these funds come directly from a person who has relationships with terrorists and/or terror financing and that this information is publically available to anyone!

Omission 1: Several articles have been written about the father of Abdallah (aka Abdullah) Saleh Kamel, being the real donor of the funds. Saleh Abdallah (aka Abdullah) Kamel of the Dallah Albaraka Group was listed on the Golden Chain financers of Al Qaeda. A lawsuit brought by the families of the victims of 9/11 named those on the Golden Chain as defendents. Saleh Kamel was released from the suit due to his living outside the personal jurisdiction of the federal court. Information was presented in the case that directly tied his company Dallah Albaraka Group to funding one of the terrorists on the planes before the attack.

Omission 2: Abdallah S. Kamel as chief executive of the Dallah Albaraka Group also bears responsibility for its financing of another federally identified terrorist group, Hamas. According to a report filed with the President of the United Nations Security Council in December 2002:

al Aqsa International Bank, was described as the “financial branch of Hamas” by American  authorities. … The bank was established with $20 million in capital by several prominent financial groups or institutions, notably the Jordan Islamic Bank and the Saudi Dallah al Baraka. The Jordan Islamic Bank is the property of the Dallah al Baraka Group, led by Saleh Abdallah Kamel, shareholder of the same bank Usama bin Laden funded in Sudan via local trustees and companies.

These two omissions of fact enable it to seem legal that Yale is working with good people for the establishing of a Shariah School at Yale. However, it is difficult to hide relationships with those who finance the outright slaughter of thousands.

Yale took down its public relations page on the Abdallah S. Kamel Islamic Law Center when this article was first proposed and the editor of the Connecticut Law tribune stated he would publish it.  That site was taken down after this writer was informed of the acceptance of this article. Interestingly Yale had one more page not available to Google which states that Yale has been in a relationship with Abdallah S. Kamel for years as they have funded lecture series on Islamic law at Yale. Really? Yale University officials never read the Wall Street Journal which wrote articles about Saleh Kamel and the Golden Chain? Yale officials never heard of the Holy Land Foundation trial which was this nation’s largest terror financing trial ever!? Worse yet, Yale officials accepting funds from Kamel had never questioned any of his banks interactions with terrorists that were noted by our Senate Banking Committee!

When NONE - DARE to Call it TREASON!

When NONE - DARE to Call it TREASON! 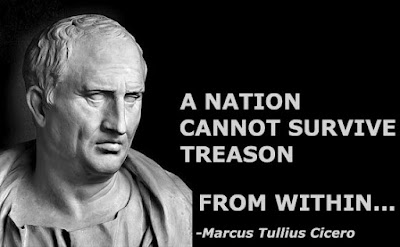 Peoples Pundit Daily: http://www.peoplespunditdaily.com/opinion/2015/12/10/treason-appointing-radical-islamic-sympathizers/
The legal code on treason is very simple.
18 U.S. Code § 2381 - Treason
Whoever, owing allegiance to the United States, levies war against them or adheres to their enemies, giving them aid and comfort within the United States or elsewhere, is guilty of treason and shall suffer death, or shall be imprisoned not less than five years and fined under this title but not less than $10,000; and shall be incapable of holding any office under the United States. (June 25, 1948, ch. 645, 62 Stat. 807; Pub. L. 103–322, title XXXIII, § 330016(2)(J), Sept. 13, 1994, 108 Stat. 2148.)
With the clear and rational definition of treason being: a) adhering to the enemy and/or, b) giving them aide and comfort, it is not difficult to see if a person is guilty of this charge.

BACKGROUND
Persons who work in the field of counter-terrorism are aware of groups such as Hamas,being an FTO, Foreign Terrorist Organization. In addition, as part of their job have to be watchful for Hamas sympathizers here in the USA. In 2007 and 2008 the largest trial on terror financing in American history took place. Holy Land Foundation Relief and Development sent Hamas $12 million over its existence. The HLF’s officers were jailed for money laundering and rendering assistance to a terrorist entity.

Robert Malley has a history of ties to the Muslim community and possibly the Muslim Brotherhood through his father, Simon Malley, whom NBC described as “a well-known journalist born in Egypt who had ties to the Egyptian government.”  Simon Malley was noted for his anti-colonialist views and his friendliness towards the Palestinian Liberation Organization (PLO). .

Malley’s pro-Islamist views first became known to the public in 1996 when he wrote The Call from Algeria : Third Worldism, Revolution, and the Turn to Islam. The next time they became public was in 2001 when the major media outlet exposed his favoritism towards Yasser Arafat and the PLO for insisting Israel was at least partly to blame for the failed 2000 Camp David Accord. The press had covered the event fully and they were not buying it. They exposed his bias on a national and international level.

Malley’s pro-Islamist views were highly documented by 2007 when he became a national security advisor to then presidential candidate Barak Obama. In 2008 Robert Malley was exposed as having met with officials of Hamas. A group designated as terrorists while he served under President Bill Clinton. There was no way a national security specialist would not know the wrongness in contacting the Hamas in Israel. Public exposure of this on November 11, 2008 in YNET news led to Robert Malley being fired from Obama’s team.

Fast forward to February 18, 2014 and Barak Obama, now as POTUS appoints Robert Malley to the position of a Senior Consultant on the Persian Gulf with the National Security Council. This is important to Remember as Malley is the person then who was responsible for Obama’s policy which enabled the Islamic State to be created from ISIS!  ISIS ceased to exist in June of 2014 when the Islamic State was declared to exist. Did Malley receive anything remotely resembling a demotion for this? No. One year later he received a promotion to “Czar over the fight with ISIS.” Remember ISIS does not exist today, rather the fight is against the Islamic State. The only people promoting the name ISIS or ISIL if you ask POTUS, is the media and Obama. The purpose is to misinform the public that ISIS does not mean Islamic.

CONCLUSION
Is it treasonous to place a man with known connections and affinity to a FTO to positions of national security? Is it treasonous to promote him to a position which requires NO Senate confirmation hearing after his policy creates calamity? Will the House impeach the president for the crime of treason on this issue? Sadly, no. There is not one real man in the House of Representatives who is willing to stand up and start the process.

What does this mean? Malley will serve as Czar over the fight with ISIS until Obama is removed from office. We can expect the Islamic State to grow exponentially under Malley.

Malley is not the only Muslim working in a position of power, who is working to promote Islamism in the White House! Loretta Lynch the new Attorney General revealed she was Muslim this past week when she used personal pronouns in reference to Islam and her desire to prosecute those who cause Muslims harm in America. But are there more still? YES! Check out my previous articles on this topic in the archive.

Pastor Greg Young asks, "What is CAIR and are they terrorists?

(December 4, 2015) Some people more so than other have the ability to go beyond daring to share the truth. Pastor Greg Young of Kerrville, TX invited me to tell the truth about the Council on American-Islamic Relations (CAIR)  on his show, "Chosen Generation Today," because he believes truth is more important than political correctness.

Pastor Greg pointed out that many Americans have no clue who the family of the San Bernadino shooters sought out to hold a press conference with. In this show I point out their connections to Hamas and how the national media should be ashamed for giving Hamas in America a national platform.

The Podcast can be found on the page linked below:
1) Click on http://www.pastorgregyoung.org/about-pastor-greg-young/
2) Select Podcast from the top menu.
3) Select the podcast with Paul Sutliff.

Below is a work in a progress of the terror links of CAIR. 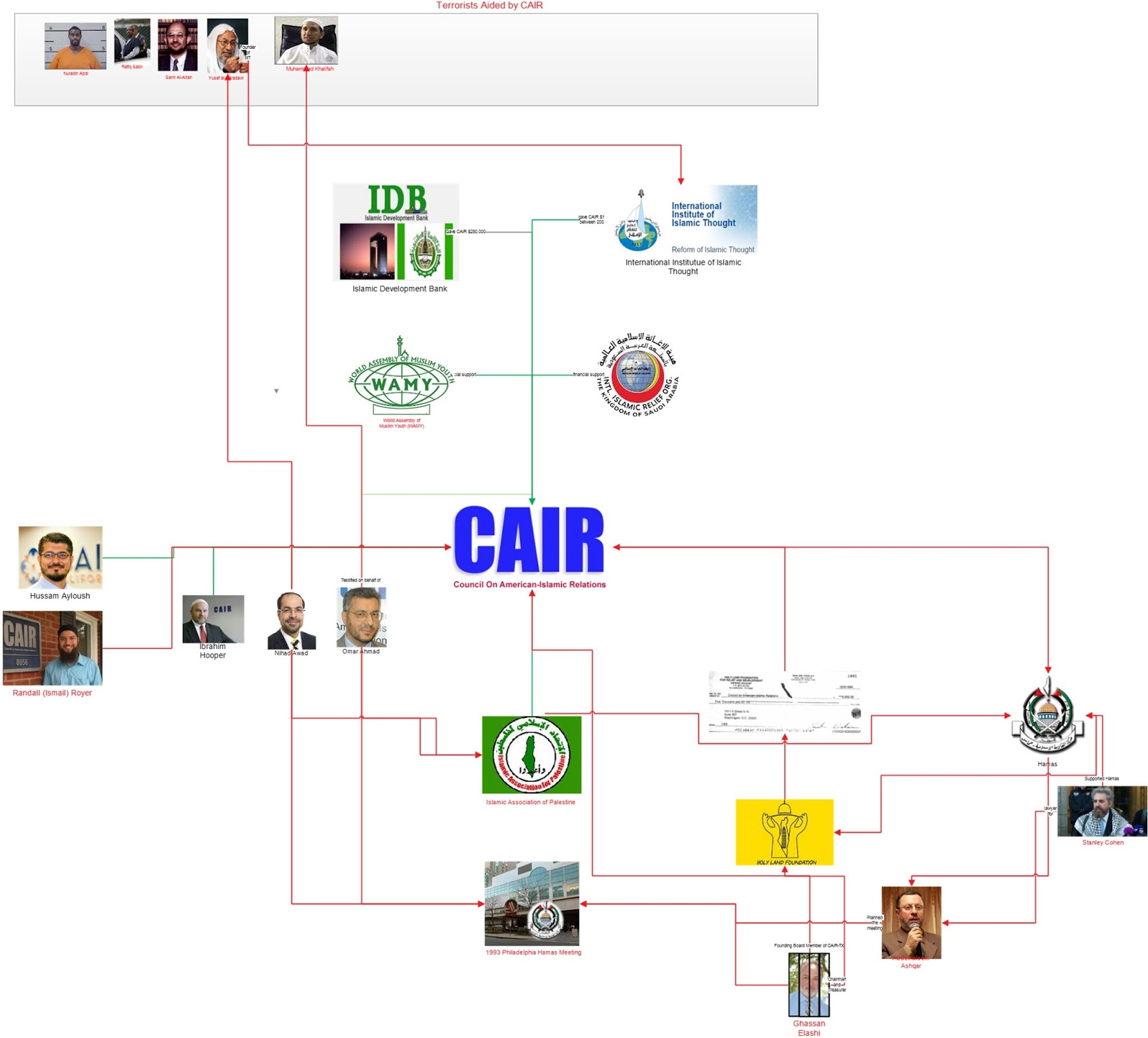 A Way to STOP the Office of Refugee Resettlement Program!


As a concerned American citizen, I have been writing about a number of topics amongst them, the purposeful mislabeling of migrants as refugees. This article earned me a little attention in that it earned my an invitation to help write legislation for the state of South Carolina to propose a moratorium on the federal Office of Refugee Resettlement Program from placing persons in their state.

My scratched out idea and the hard work of five lawyers over this past weekend led to a 3-page bill ready to be passed. Unfortunately, the state senator who had invited this assistance did not have what it takes to step up and propose this bill.

Today this bill stands ready to be adopted to any state legislature and by its simplicity and the trying times that are ever present with refugees or children of refugees attacking the US citizenry stand as examples that American politicians must step up and take action! If you want a copy of this legislation for your state please contact me and I will send it to you along with a promise to support you in any way I am able to do so.

I have to believe that there are politicians out there who think about the general welfare and safety of their people. They do exist? Don't they? 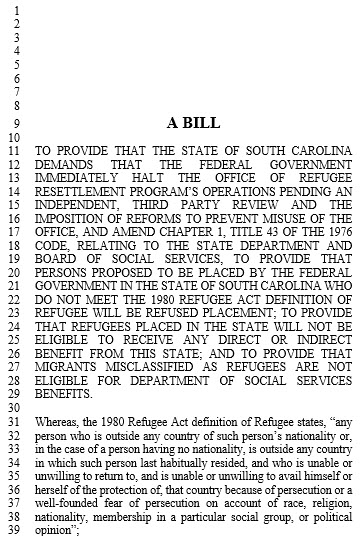 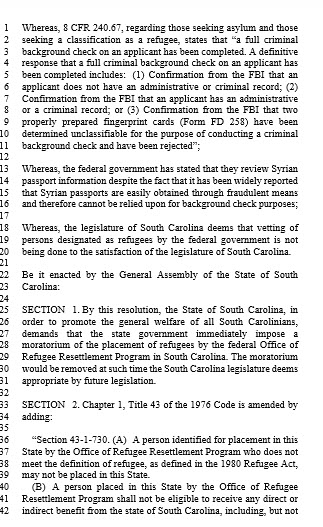