Challenge to Yale President: Debate the Issues of Sharia vs. the Constitution! IF YOU DARE! 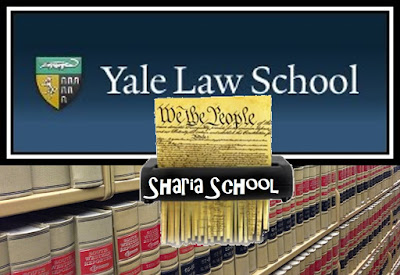 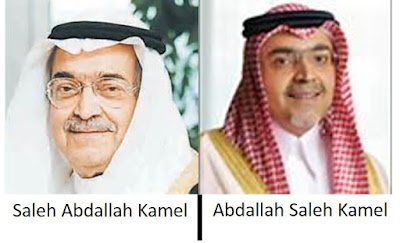 Yale Law School must have an extremely low standard of background research on those that would have their names emblazoned on the college for centuries to come. This research took less than an hour on Google.

In addition, Yale President Salovey made misleading statements to the public on September 8th regarding the sharia school:


Mr. Kamel’s extraordinary generosity will open up exciting new opportunities for Yale Law School and for the entire university. The Abdallah S. Kamel Center for the Study of Islamic Law and Civilization will enhance research opportunities for our students and other scholars and enable us to disseminate knowledge and insights for the benefit of scholars and leaders all over the world.

How will teaching sharia at a law school benefit those in Yale? It only benefits Muslims. But is it a benefit to Yale? To America? to the world?


Sharia vs. US Constitution
Sharia literally means “right path” it is the Arabic term for Islamic law. Sharia does not allow nor does it accept our current government which Abraham Lincoln described in the Gettysburg Address as "Government of the people, by the people, for the people.”

A shariah based government is a non-democratic theocracy. Because sharia denies the right of man made law to exist that do not submit to sharia, as everything is to be in submission to sharia, it can not accept the very Preamble of the Constitution, which states:


We the People of the United States, in Order to form a more perfect Union, establish Justice, insure domestic Tranquility, provide for the common defense, promote the general Welfare, and secure the Blessings of Liberty to ourselves and our Posterity, do ordain and establish this Constitution for the United States of America.

This says nothing about the Freedoms of the People protected by the Bill of Rights. Just look at the First Amendment. Sharia is in direct opposition to these few words!


Congress shall make no law respecting an establishment of religion, or prohibiting the free exercise thereof; or abridging the freedom of speech, or of the press; or the right of the people peaceably to assemble, and to petition the Government for a redress of grievances.

For this reason I, Paul Sutliff, Author and Writer challenge both President Peter Salovey and Yale Law School Dean Robert C. Post to a debate on the following points:

If you can not think of a reason to answer any of these questions in a debate forum, why are you taking $10 million from a person who’s father has been long thought by the FBI to be an Al Qaeda financier? Why would you promote any law that stands in direct opposition to the US Constitution? These are the questions Americans want answered!

The cowardly Office of President at Yale declined my invitation to debate his own claims.

Buy a book by the man who Yale's President is afraid to debate his own claims!

FEMA is Funding Muslims in America Who Support Terrorism

FEMA created the Non-Profit Security Program (NSGP) to provide assistance to non-profits targeted and/or threatened by terrorist organizations. The intent was to help targeted organizations in high threat areas of the country, it was not to provide funds for people who defend terrorists.


In 2009 the School of Islamic Studies of Broward, Inc. (SISB)  was award $50,000 by a FEMA grant intended to assist those non-profit organizations targeted by terrorists groups. In 2010 SISB changed its name to the Islamic Foundation of South Florida. For anyone keeping up on Counter-Terrorism this is a bell ringer. South Florida was the home of self-confessed terrorist funder Sami Al-Arian, alleged leader of the Palestinian Jihad, a terrorist group that worked hand in hand with Hamas, a self-declared chapter of the Muslim Brotherhood.


The Islamic Foundation of South Florida, formerly known as SISB had the same principle agent, Khurrum Basir Wahid. Wahid is a lawyer well known for doing one thing: defending those charged with terrorism.
Joe Kaufman, wrote about Khurrum Bassir Wahid this past June in an article on Front Page Magazine. Kaufman noted that Wahid has a history of defending terrorists with ambitions.

Khurrum Wahid also served as the legal advisor for the national office of the Hamas-linked Council on American-Islamic Relations (CAIR) and was a director of CAIR’s Florida chapter. CAIR was started by the exact same officers who ran the Islamic Association of Palestine (IAP) which was sued for wrongful death in civil court losing $14 million dollars for having been proven in a US court of law to have provided monetary support to Hamas who killed David Boheim an Israeli American. CAIR’s connection to Hamas has been documented in federal court and by the FBI. It was started with money from the Holy Land Foundation, an entity closed by the Federal government for funneling money to Hamas.

CAIR was recently labeled a terrorist entity by the United Arab Emirates. This was done because Hamas is the Palestinian chapter of the Muslim Brotherhood.


According to the Miami New Times, Wahid himself was placed on a federal terrorist watch list in 2011.


Today, Wahid is the co-chairman of Emerge USA. He is also one of the founders of Emerge. The group attempts to dupe politicians into attending its events by seducing them with a “Muslim vote,” but in reality, Emerge is nothing more than a front for anti-American and anti-Israel Islamists. (Front Page Magazine)

Wahid has other connection to the Muslim Brotherhood through his guest writing for Muslim Public Affairs Council.  MPAC officers have regular appointments with the White House some of the officers have had several meetings with President Obama.


Pay attention to Wahid’s connection to the Florida chapter of the Council of American Islamic Relations (CAIR-FL). David Gaubatz used the term “incestuous relationships” in his book Muslim Mafia, to describe the tangled relationships that exist within Muslim Brotherhood front groups. Wahid is a perfect example of this. For not only does he have positions in CAIR-FL and the Islamic Foundation of South Florida, he is one of the founders and Co-Chairman of Emerge USA, another Muslim Brotherhood group that is politically active claiming it can garner Muslim votes for politicians.


Because Wahid’s school received $50,000 in 2009 it is likely he advised the national office of CAIR to post this advertisement of the FEMA Grant to other CAIR Chapters. 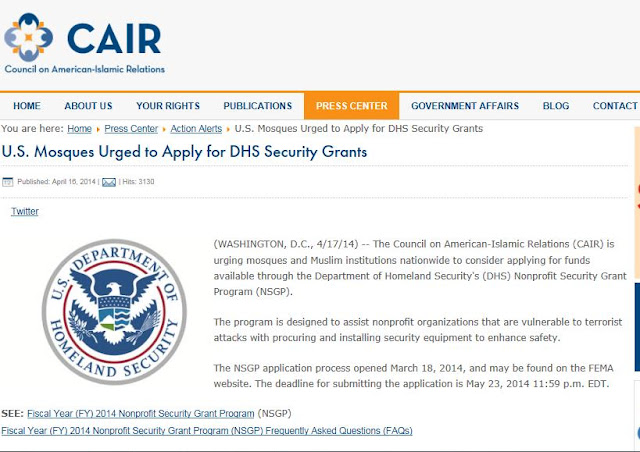 Council on American Islamic Relations – FL (Sunrise, FL)
CAIR-FL applied for the same funds in 2014. FEMA has awarded CAIR-FL’s Sunrise office $75,000 which they will receive on September 30, 2015.
The Non-Profit Security Grant Program (NSGP) requires that applicants submit copies of police reports that verify “identification and substantiation of a prior threats or attacks (from within or outside the US) by a terrorist organization, network, or cell against the applicant based on their ideology, beliefs, or mission.” (NPSGP p. 14). CAIR-FL wrote on their application that the Southern Poverty law Center claimed they were the subject of threats. They even reported events previous to moving in at this location. In addition, CAIR-FL claimed they had received 123 pieces of hate mail/threats in 2014. However, no evidence exists of those threats! Police and/or Insurance evidence is a Grant requirement to be eligible for funding!
The reason why a police report is needed is to stop people from the crime of “filing a false instrument.” This is the name of the crime for falsifying information on government forms.
CAIR-FL submitted a letter by Officer Cindi McCue of the Sunrise Police Department. It stated:
While I was visiting your space, you stated that CAIR has occupied the space for approximately one year. A check of our dispatch records show no calls for service during the last twelve months.
According to Officer McCue, CAIR-FL has not called them for any reason. Officer McCue’s letter included notations on good placements for security cameras and other suggestions for standard security protocols. However, her statement that there been NO CALLS is evidence that in the past year CAIR-FL has not received any verifiable threats at this location. The NSGP required that applicants be in “designated urban areas.” One of those areas is Fort Lauderdale.  The CAIR-FL address is a 15 mile drive from Fort Lauderdale according to Google Maps.  Yet, FEMA stated that they will award CAIR-FL $75,000 on September 30, 2015!
CAIR-FL has defended every accused Islamic terrorist from their community. From their defense of Sami Al-Arian a University of South Florida professor who had been accused of being a leader of the Palestinian Jihad and confessed to the lesser charge of providing material help to a terrorist network. Sami Al Arian  who was deported in May 2015 for not meeting the conditions of his plea agreement to the lesser charge of funding terrorism in exchange for testimony which he refused to give.
One question remains to be asked. Who is awarding FEMA grants to organizations that do not meet the bare minimum specifications?