Is CAIR really Hamas in America? You be the judge! 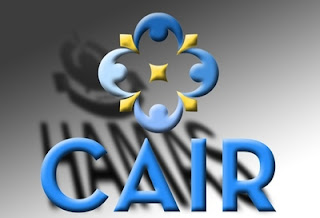 The Council on American Islamic Relations (CAIR) was formed due to IAP being accused of financing Hamas. The case went through appeals and the Islamic Association for Palestine (IAP) finally lost big in 2004 as a result of being determined to have provided financing for Hamas. IAP was dissolved in 1994 as the case was amping up. This allowed them not not to pay out as they eventually lost owing $185 million.
The truth is that, David Boim, a 17-year old American citizen, who was a Yeshiva student in Israel was killed by Hamas. IAP was alleged to have funneled money to the terrorist Hamas, a USA designated terrorist entity. The lawsuit was won by the Boim family in December of 2008; the appellate court upheld a $156 million dollar judgment against IAP and two other Islamic Charities. With the damage done to IAP, the organization was disbanded and reformed into what is now known as the Council for American-Islamic Relations (CAIR).
Take note of the original officers of CAIR vs IAP. 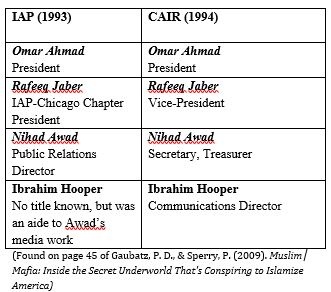 As CAIR and IAP had little if any differences of officers, this establishes a direct correlation and relationship of CAIR and IAP. The relationship between IAP and Hamas was established by the Muslim Brotherhood in America (GOVERNMENT. EXHIBIT. 003-001 7. 3:04-CR-240-G). Here it is important to understand that Hamas is a chapter of the Muslim Brotherhood. So there is no better authority to make the statement.
According to the Hamas Covenant:

Article One:
The Islamic Resistance Movement: The Movement's programme is Islam. From it, it draws its ideas, ways of thinking and understanding of the universe, life and man. It resorts to it for judgement in all its conduct, and it is inspired by it for guidance of its steps.
The Islamic Resistance Movement's Relation With the Moslem Brotherhood Group:
Article Two:
The Islamic Resistance Movement is one of the wings of Moslem Brotherhood in Palestine. Moslem Brotherhood Movement is a universal organization which constitutes the largest Islamic movement in modern times. It is characterised by its deep understanding, accurate comprehension and its complete embrace of all Islamic concepts of all aspects of life, culture, creed, politics, economics, education, society, justice and judgement, the spreading of Islam, education, art, information, science of the occult and conversion to Islam.

So who better is there to recognize that IAP worked with Hamas? Keep in mind we are talking about the very same officer who ran CAIR and still are! But there is still more evidence that CAIR is Hamas in America.
The largest terrorism financing trial of the USA was against, the Holy Land Foundation and Development (HLF). This organization was found guilty of financing Hamas. Now ask yourself why would an organization that finances Hamas, a USA designated terrorist entity, give seed money to the Council on American-Islamic relations (CAIR)? Worse, why would Nihad Awad perjure himself in court and deny this? After all the lies, Steve Emerson’s Investigative Project on Terrorism revealed a copy of a cancelled check from the Hamas financier, the Holy Land Foundation.

(Source: http://www.investigativeproject.... )
This is the old information. If HLF was a financier of HLF, why did funds go to CAIR? Could it be that they considered CAIR the American version of Hamas?
Opportunities have arisen for CAIR to distance itself from Hamas. As recently as November 2017, CAIR Minnesota Chapter representative, Jaylani Hussein refused to condemn Hamas. Instead he said:

CAIR is the largest civil rights and civil liberties organization. We have 35 chapters across the United States. We’re an American organization. We are a grassroots organization, supported and funded by people locally, made up of people who look like you and look like me. I understand that my organization comes under threat and know why we come under attack. It’s not because of our silence. It’s because we carry a big stick, we remind people of the Constitution. We remind people that American Muslims are exactly like everyone else. And we’re not gonna allow anyone to threaten us, or create the fact that Muslims have to hide, and so we are an organization just like any other organization. We get audited. We get reviewed, we are a state-accredited organization and so if you think we are a terrorist organization then call the FBI and let them know, and let them investigate.

A non-answer. A non-condemnation.
Nihad Awad has been recorded standing behind Hamas in 1994. Here Nihad Awad stated:

I used to support the PLO, and I used to be the President of the General Union of Palestine Students which is part of the PLO here in the United States, but after I researched the situation inside Palestine and outside, I am in support of the Hamas movement more than the PLO.

This is CAIR’s current leader. But then you could not expect a leader of entity to condemn the entity itself.
These are the facts. They are not made up. What do you think? Is there enough evidence here to posit that the Council on American-Islamic Relations (CAIR) is indeed Hamas?

Who is at fault for the lack of immigrant integration in the UK?

The claim that multiculturalism is stopping integration is partially correct. The pushed belief that the UK is a blend of cultures and no longer has its own culture has been destructive indeed. But the true cause of the lack of integration has to do with two major issues.
Islam has a doctrine of migration before jihad known as al-hijrah. Which literally means migration. This doctrine was started by Muhammad when he left Mecca so he would not be killed by Meccans for conspiring against them. Muhammad had met with leaders of Yathrib and agreed to grow an army and come back and attack Mecca. The Meccans discovered this and sought him out. Muhammad escaped with Abu Baker in the night. (See Ibn Ishaq's Sirat Rasul Allah for documentation)
The Koran also has four verses on this:
The Hadiths also record this doctrine:
Notice the mention of jihad. Aisha’s comment here implies that Muslims MUST set out (migrate) for the purpose of jihad only. This agrees with:
This brings me to the second answer to this question. Surely if Muslims are migrating for the purpose of taking over they would not integrate! They would tell others not to integrate. That makes sense IF what I am telling you here is true. Listen to UK Imams tell their followers not to integrate:
This is not unusual documentation. This behavior has been recorded in several European countries that Muslim migrants have arrived in.
So the answer is that it is against Muslim teaching to integrate into Western Society. So expecting any different is foolish. 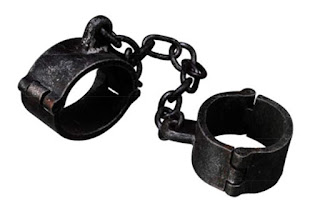