EXPOSE: Is Dr. Qanta A. Ahmed to be trusted when she speaks about Islam? 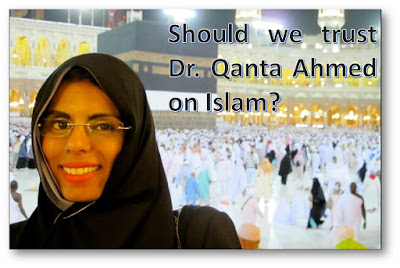 Dr. Qanta A. Ahmed is indeed an expert in both Sleep Medicine and Journalism. She extensively writes for many publications against Anti-Semitism, for which she should be commended. She is also noted as being interviewed and published on “radical” Islam. This article seeks to expose that Dr. Ahmed, an incredible expert in Sleep Disorders and a noted journalist on Anti-Semitism, does not communicate truthfully about Islam, or she is communicating a lack of knowledge of Islam. This would remove her “expertise” on “radical” Islam.

On February 14, 2019, Dr. Qanta Ahmed published Opinion: Ilhan Omar Brings Shame To American Muslim in the Daily Caller in which she gives credentials as being a member of the Council on Foreign Relations. She wrote in the first sentence that:


In the very first sentence in this article Dr. Ahmed reveals she is either dishonest in what she communicates as being Islamic, or she is not knowledgeable of Islamic sources which disagree with her. In addition, her comments go against the Anti-Semitism just being discovered as being expressed in many mosques in North America thanks to the hard work of organizations like the Middle East Media Research Initiative (MEMRI). Her claim that Anti-Semitism views shame American Muslims is also negated by the expressed views of many American Muslims.

A quick visit to Dr. Ahmed’s website, https://www.qantaahmed.com reveals some interesting points. She has outstanding credentials and awards as a medical doctor and an incredible expert in the field of Sleep Disorders. Her bio makes no claim of expertise on Islam or on radical Islam.

While Dr. Ahmed may not claim to be an expert on Islam in her bio, her statement that the Anti-Semitism of Rep. Omar, shames American Muslims makes her out to speak for all American Muslims. Is she even close to right on this?

MEMRI translated a February 14, 2019 broadcast from Al-Aqsa TV (Hamas/Gaza). This clip showed the mother of Muhammad Said Ali, a 19 year old Palestinian who was killed when he attacked Israeli policemen with a knife at the Damascus Gate in Jerusalem. She says in this clip that

"Muhammad was someone you could rely on. He was a hell of a guy. A butcher. A lion. You could see in the video of the attack how practiced he was in wielding a knife, because he was a butcher. Muhammad was a butcher and knew how to slaughter."

Granted this is not American Islam, but Islam from an area of Israel that is Islamic and run by an entity that claims to be following Islam. What do North American Muslims preach in Mosques?

One of the reasons I avoid attending Friday congregations at mosques is a specific ritual supplication uttered by Imams at many mosques in Canada and around the world, just prior to our formal Friday community prayer, the Juma’a.

In the supplication, the cleric prays to Allah for, among other things, to grant “Muslims victory over the ‘Qawm al-Kafiroon,’” the Arabic phrase that lumps all non-Muslims — Jews, Hindus, Christians, Atheists, Buddhists and Sikhs — into one derogatory category, the “Kuffar”, or non-Muslims.

This supplication is not obligatory. Not uttering this prayer would in no way adversely affect the holiness or solemnness of the collective community prayer.

I have long argued with my orthodox and conservative Muslim friends and family that at least when living among non-Muslims, we should avoid praying for their defeat at the hands of Muslims.


While Tarek Fatah is showing that Imam’s are indeed offering prayers against Jews, he also showed that the Muslims are praying for governmental conquest against all other religions.

MEMRI recently reviewed a video of Detroit, Michigan Shi’ite Imam, Bassem Al-Sheraa given on January 27, 2019, in which he said:


[The Jews] employ tricks and fraud in matters of religion and moral values. They distort [sacred texts], and therefore it is said that the Jews would often kill their own prophets. They would sanction the killing of one another. In addition, they allowed their women to engage in prostitution, God forbid. Following the [Babylonian] captivity, when Nebuchadnezzar exiled them and destroyed the Temple, the Jews said: 'Money and women are our most powerful weapons.'


October 15, 2016:  "Some of you think the Roman Empire stopped, because your [knowledge of] history is kind of weak. The American Empire is often considered by many scholars to be Pax Romana, and a continuation of the Roman Empire. It's the same people, they just relocated the capital. Even if you look deeper, behind the scenes – Jews [are] running everything. The real Jews, or the Ashkenazi [Jews]?

MEMRI.org also exposed a NYC Cleric Ibn Muneer: Islam Without Jihad Is Like Honey Without The Sweetness; Don't Apologize For Speaking The Truth About Jihad, Jews, And Christians on December 17, 2018. Imam Ibn Muneer said: 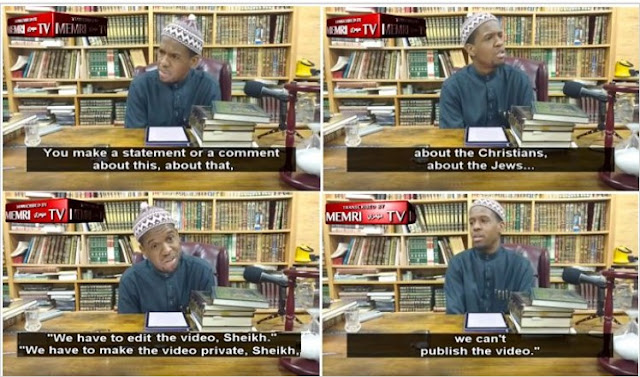 Sadly, there are many more examples of such Anti-Semitic statements by Imams across the USA and Canada. So is Dr. Ahmed even close to accurate, when she claims that American Muslims are offended by Anti-Semite, Rep. Omar?

Islamic scholar Robert Spencer says, that none of what Dr. Qanta Amad is saying is true! He writes that:


There is a strong native strain of anti-Semitism in Islam, rooted in the Qur’an. The Qur’an puts forward a clear, consistent image of the Jews: they are scheming, treacherous liars and the most dangerous enemies of the Muslims.

The Qur’an presents Muhammad as the last and greatest in the line of Biblical prophets, preaching a message identical to theirs. The identical character of their messages may seem odd to those who know very well that the Qur’an’s contents are quite different in character from those of the Bible, but the Qur’an has an ingenious explanation for this: the original message of all the Biblical prophets was Islam, and they were all Muslims. Only later did their followers corrupt their messages to create Judaism and Christianity.

Consequently, in the Qur’an, Abraham is not a Jew or a Christian, but a Muslim (3:67); his message was identical to Muhammad’s. The Islamic claim is that the authentic Torah actually commands Jews to follow Muhammad and recognize his prophecy. Those who refuse to accept Muhammad as a prophet are, in the Muslim view, rejecting both Moses and the prophecies of the Torah. It is no surprise, then, that in the Qur’an both David and Jesus curse the disbelieving Jews for their disobedience (5:78).

Yet of course, Torah-observant Jews did not and do not accept Muhammad as a prophet, and this, according to Islamic tradition, enraged the prophet of Islam during his lifetime. According to Islamic tradition, Muhammad initially appealed energetically to the Jews, hoping they would accept his prophetic status. He even had the Muslims imitate the Jews by facing Jerusalem for prayers, and he adopted for the Muslims the Jews’ prohibition of pork. But he was infuriated when the Jews rejected him, and Allah shared his fury in Qur’anic revelation: “And when there came to them a messenger from Allah, confirming what was with them, a party of the people of the Book threw away the Book of Allah behind their backs, as if they did not know!” (2:101).

Another Jewish leader noted that “no covenant was ever made with us about Muhammad.” Allah again responded through his Prophet: “Is it ever so that when they make a covenant a party of them set it aside? The truth is, most of them do not believe” (2:100). In fact, Allah gave food laws to the Jews because of their “wrongdoing,” and “for their turning many from the way of Allah” (4:160), and by doing so, “repaid them for their injustice” (6:146). Some Jews are “avid listeners to falsehood” who “distort words beyond their usages.” These are “the ones for whom Allah does not intend to purify their hearts,” and they will be punished not just in hellfire but in this life as well: “For them in this world is disgrace, and for them in the Hereafter is a great punishment” (5:41).

Jews dare to deny divine revelation, claiming that “Allah did not reveal to a human being anything,” to which Muhammad is told to respond, “Who revealed the Scripture that Moses brought as light and guidance to the people? You [Jews] make it into pages, disclosing some of it and concealing much” (6:91). …

Robert Spencer’s article is highly detailed citing several Islamic sources. This is a small piece of this exposure that Americans were being deceived when Dr. Ahmed claimed that American Muslims are offended by the Anti-Semitic Congresswoman Ilhan Omar.

So what was the purpose of the statement by Dr. Ahmed? Was it to claim that Muslims here in North America hold different beliefs from the Muslims in the Arab world? Was it to state all Muslims love Jews? My conclusion, is that Dr. Ahmed, while a notable expert in the medical field is either full of deceit when she claims to know anything about Islam and thus a voice piece of deception for the major media outlets to eagerly consume or she is supremely ignorant of a faith she professes to hold. In either case, she should not be trusted for any statements she makes about Islam as a whole. Please understand her medical expertise is not in question at all. I believe she has earned respect and trust in the medical field! However, her words about Islam promote Civilization Jihad by duping the masses who listen to her claim that American Muslims despise Anti-Semitism.