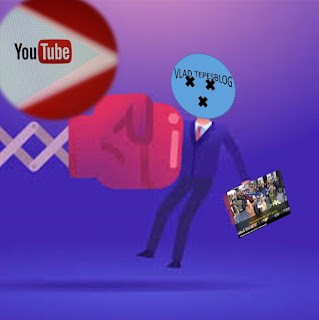 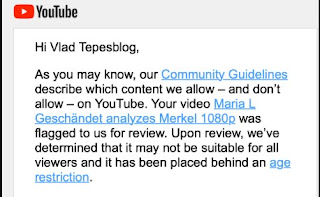 View here judge for yourself if this deserves an Adult Rating: https://bit.tube/play?hash=QmSmFBVZ8TkkLxj3EoWm1bF96P1e1tGEojpWstC8kzYpSA&channel=251530 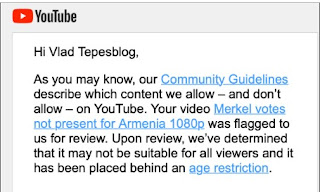 View here judge for yourself if this deserves an Adult Rating: https://bit.tube/play?hash=QmSomHDJakfvxdqeuvGoE4CQA9JAcraeydVYNKt9TnosaK&channel=251530

Is Google Politicizing viewership and subscriber numbers?
Vlad TepesBlog’s YouTube Channel had over 30,000 subscribers.  Their videos were not monetized as the goal was to get the truth out and not have it be thought that income would sway what was shared. One of Vlad Tepes Blog’s subscribers wrote to them that they were under attack by Google, because his subscription count was not increasing and appeared frozen. It became a talking point for months when the number was approximately 24,xxx for a few weeks. It then shot up to 30,000 within 6 weeks. Having posted several hundred videos Vlad TepesBlog had other concerns that YouTube was adjusting the viewership statistics.

Tested
Vlad TepesBlog works with Gates of Vienna sometimes. In this case he embedded his videos on the Gates of Vienna with YouTube videos averaging a daily viewership at YouTube of between 600 to 1600 views per day. Sometimes they might get as high as 3,000 to 4,000. This encouraged further curiosity at statistical manipulation by YouTube/Google. So Vlad TepesBlog did some work with Freezoxee.com a place he had ZERO subscribers, unlike YouTube where he had accumulated 30,000+. So the only people who saw the video were people who saw the social media ties to the site.

There were 15,000 to 30,000 views which over a several days. Vlad TepesBlog states that this count far exceeded the amount of viewers YouTube was reporting for the hundreds of videos on his channel over the same period time.

The frozen subscription count plus the low viewership counts made Vlad wonder if they are concerned about his actual influence. Influence? Yes! When a channel gets a lot of attention YouTube promotes it in various ways. Even individual videos get promoted due to high viewership. So was the attempt purposeful to limit their influence hence stopping videos from going viral?

Congressional leadership prior to the Democratic takeover of the House was pursuing a look into flagrant First amendment violations of these Social Media platforms like Facebook, Twitter and YouTube for directly limiting the influence of persons who are Conservative and/or Anti-Jihadists.
Sadly, the mass reporting of VladTepesBlog and the forced closure of its channel show a huge flaw in the security measures of YouTube, and other Social Media platforms. That being the evident lack of

Due Process.
Due Process is what protects a person from false accusations and usually ferrets outs liars in a timely fashion. YouTube accepted complaints that videos with no violence or sexual themes should now be labeled and require age verification to view adult content. This implies that your daily news feed according to YouTube should be labeled Adult Content. This means no comments can be seen or written.

The worst problem here is that NO HUMAN CONTACT is possible! You can only appeal a decision with a form response that may or may not be read by a human.

Important Questions for YouTube
Are bots all that reviews complaints? Are there security measures in place to address mass reporting?  What is the process of review for an actual complaint before a label of Adult Content is applied? What happens if a reviewer shows bias or incompetence when reviewing content?

YouTube Does NOT CONSISTENTLY close Hate Channels
Social Media giants seem set on controlling messages to their platform. YouTube has been caught hosting content that promotes Anti-Semitism under the guise that it is Islamic. The Middle East Media Research Institute has caught several videos on YouTube and noted the names of the persons and the organizations posting Anti-Semitic content under these circumstances. Persons with platforms that have been exposed by MEMRI include Zafar Bangash, who leads the Institute of Contemporary Islamic Thought (ICIT). ICIT has a YouTube Channel called the ICIT Digital Library.

Perhaps YouTube thinks this is acceptable because this channel only has 4,562 subscribers?
MEMRI also exposed Sheikh Omar Baloch. His promotion of Islamic Relief should be enough of a concern to remove his You Tube Channel. The Middle East Forum’s extensive expose of Islamic Relief’s connections to known terror entities and persons is more than enough to post a flagged warning of adult content! But as you can see Sheikh Omar Baloch’s channel still exists.

There are far too many examples of this non-censorship of channels sponsored by persons connected to Anti-Semitism and Jihadi terrorism.

You have to ask how Google aka YouTube finds reason to justify keeping content that is connected to Anti-Semitism and terrorism, AND how are news feeds subtitled into English deemed offensive at all!

Yet YouTube claims it catches most of the hate and terror videos. It hosted Islamic State videos that the government had to request be taken down! Yet their own content reviewers seem to target persons who have influence and are sharing actual News coverage simply because the content reveals unpopular truths?

This past December YouTube made the news after closing 1.67 million channels and all of the 50.2 million videos associated with them. According to Reuters, YouTube claimed, “Nearly 80 percent of the channel takedowns [were] related to spam uploads. About 13 percent concerned nudity, and 4.5 percent child safety.”

Final Thoughts
Are we to believe news is now to be counted in the same category as spam, nudity, and child safety issues? But Anti-Semitic speech is protected if it is Muslim?

While a formal apology and restoration of all the work of Vlad TepesBlog would be considered a good business strategy for YouTube, versus a lawsuit for alleging that news which was subtitled needed an Adult content rating.

The Threat Doctrine of the Muslim Brotherhood via Qutb